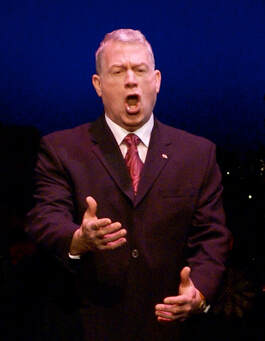 ​His warm resonant tone, extensive range, and vocal agility are particularly well-suited to Baroque literature, for which he has received special recognition. In addition to numerous cantatas of Bach and celebrated vocal works of Handel, his Early Music repertoire includes performances of Monteverdi, Schütz, Charpentier, Purcell, Carissimi, Blow, Buxtehude, Bruhns, and Telemann. He is a member of Maine's professional Early Music ensemble St. Mary Schola, and a frequent guest artist at the Blue Hill Bach, White Mountain Bach, and Portland Early Music festivals.

His work with Maine’s Longfellow Chorus during the poet’s bicentennial featured performances and recordings of historic and contemporary settings of Longfellow’s works written specifically for bass voice.

As well as being a featured soloist, he has also appeared as concert narrator for works such as Stravinsky’s A Soldier’s Tale, Prokofiev’s Peter and the Wolf, and orchestral arrangements of ‘Twas the Night Before Christmas and a perennial audience favorite, How the Grinch Stole Christmas.